Here are the critical statistics, along with those for the prior 4 fiscal years: 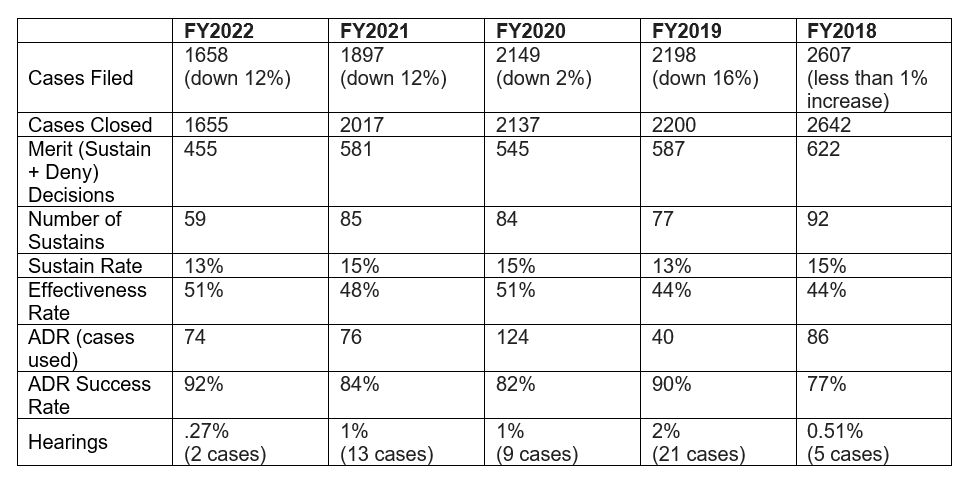 One thing that jumps out almost immediately are the numbers for “Cases Filed,” “Number of Sustains,” and ”Sustain Rate.”  First, for the fourth year running, the number of protests filed at GAO has dropped.  In FY2022 this number dropped 12%: to just 1655.  This is the second year in a row that the number of protests filed has dropped by double-digit percentage points.  While the Report does not include agency-level and U.S. Court of Federal Clams protests, this drop is noteworthy, since, GAO is, for a number of reasons, where most protesters choose to file.

Second, as the statistics regarding sustained protests indicate, GAO nevertheless remains a viable forum for disappointed offerors to seek relief.  In FY2022, the number of sustains, i.e., protests where GAO issues a written decision, on the merits, in favor of the protester and against the Agency, was 59, resulting in a sustain rate of only 13%.  While this is low, as any contractor or practitioner familiar with GAO can tell you, they are accustomed to the fact that GAO simply does not sustain most protests (certainly no more than a quarter of those filed annually any time in the last 10 years).  Far more interesting then, is the effectiveness rate, which is much higher.

In fact, it is over 50 percent.  As GAO notes, the effectiveness rate is the percentage of instances that the protester obtains some relief from the Agency, either as a result of a sustained protest or voluntary agency corrective action.  That over half of protesters did in FY22 is notable.  Of course, this fact comes with the caveat that, for example, a sustain or voluntary corrective action may simply result in a reevaluation of proposals, with no guarantee that the outcome of the competition would change from the perspective of the protester.  That said, the number does speak to GAO’s status as the principal destination for disappointed offerors, and it is certainly one of, if not the, key take-away from this year’s Report.

Another key stat is the relatively low number of protests that were decided on the merits.  Over two-thirds of protests were resolved prior to a written decision sustaining or denying them, through mechanisms like agency corrective action, requests for dismissal, or ADR.  Somewhat relatedly, it is notable just how few and far between hearings are.  Out of the 1658 protests filed, only 2 went to hearings.  Thus, it is clear that there is a premium on the persuasive written briefing and that litigants cannot rely on the possibility of a hearing to flesh out their bases for protest.

Finally, the Report ranks the most frequent bases for GAO sustaining protests:

Of the protests resolved on the merits during fiscal year 2022, our Office sustained 13 percent of those protests.  Our review shows that the most prevalent reasons for sustaining protests during the 2022 fiscal year were: (1) unreasonable technical evaluation; (2) flawed selection decision; and (3) flawed solicitation.  It is important to note that a significant number of protests filed with our Office do not reach a decision on the merits because agencies voluntarily take corrective action in response to the protest rather than defend the protest on the merits.  Agencies need not, and do not, report any of the myriad reasons they decide to take voluntary corrective action.

One and two are somewhat vague (and, frankly, raised in most post-award protests), but three is quite interesting.  And the findings suggest that more and more protesters are filing (and prevailing in) pre-award challenges to the terms of the solicitation.  Given that untimely challenges to the solicitation terms are a common basis for an agency request for dismissal of a post-award protest, this data suggests that companies and practitioners should carefully scrutinize the terms of solicitations they are preparing to respond to, to determine whether it is necessary to file a pre-award protest.

The Butzel Aerospace and Defense team has significant experience with bid protests at not only GAO but also at the Court of Federal Claims and at the agency level.  Please contact a team member if your company needs to consult regarding Federal bid protests.